Businesses & business owners have now shifted their focus on employee wellbeing even as the demand for office spaces that place employee well-being at the forefront go up.

This is according to a report by Knight Frank where they further stated that the new office space in Nairobi & other cities across Africa requirements increased by 29% in Q2 2021 compared to Q1.

The report also stated that the increased office market activity has been attributed to the ‘flight to the quality trend that has seen businesses taking advantage of weakened prime office rents to occupy office spaces that place employee wellbeing at the forefront as well as improving economic outlook across most of the countries.

It used to be a case where employee well-being programmes were confined to bigger organisations with a big budget and the luxury of a big HR department.

The fact is that companies are not just investing in employee well-being to be nice, there are tangible benefits of having access to well-being professionals and should be a consideration for all companies.

Data from Knight Frank also indicates that the share of new office space requirements across the nine countries they are located in (Kenya, Uganda, Nigeria, Tanzania, Zambia, Zimbabwe, Malawi, Botswana, South Africa) was dominated by Professional Services (29%), Industrial & Logistics (16%), Financial Services (14%), Healthcare 12% and NGOs (8%), who together accounted for almost 80% of new office space requirements across Africa in Q2, indicating a return in business confidence in these sectors. 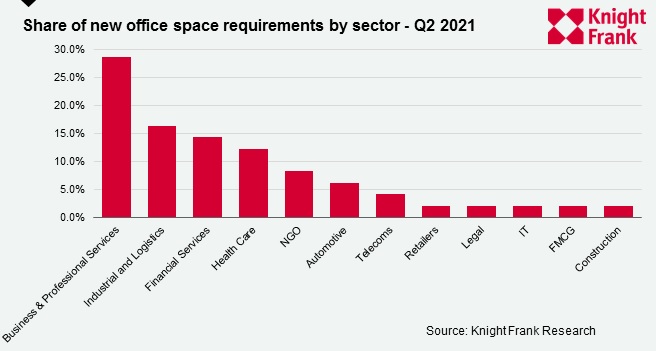 Knight Frank also observed that businesses that had previously put office requirements on hold due to the pandemic were reactivating their searches with landlords becoming more flexible by allowing for discounted rents and lease concessions such as increased rent-free periods in a bid to attract and retain tenants.

Tilda Mwai, Senior Researcher Knight Frank Africa says: “The overarching trend across Africa’s office market is the continued flight to quality. Occupiers remain focussed on occupying best-in-class offices that offer greater flexibility around lease terms. The desire to occupy the best office buildings is driving up tenant release space in some cities’ Grade B buildings, which is likely to fuel a greater disparity between the performance of Grade A and Grade B office rents.”

He added that this presents a real opportunity for landlords of slightly older buildings. If refurbished to a new, modern standard, they can compete effectively for tenants looking for high-quality offices.”

However, market performance continues to vary based on the country. In Nairobi for example, prime office rents dropped marginally by 1% q-o-q due to lockdown restrictions imposed at the onset of Q2 2021.

In addition, markets such as Western Cape and Gauteng in South Africa continue to see increased vacancy rates and downward pressure on prime rents, prompting landlords to offer incentives and discounts.

Notably, Nigeria recorded increased occupier activity in the market driven by office relocations from the CBD to the suburbs, as occupiers gravitated to locations offering both better quality accommodation, as well as more affordable lease rates. Furthermore, occupier activity in locations such as Tanzania is expected to recover underpinned by renewed investor confidence fuelled by the new leadership.

Nairobi has continued to see a gradual return in business confidence reflected by the increased number of business entities registered.

Why Proptech Is The Future Of Real Estate

2022 and Beyond // Why Proptech Is The Future Of Real Estate